My Confederation Book is Out! 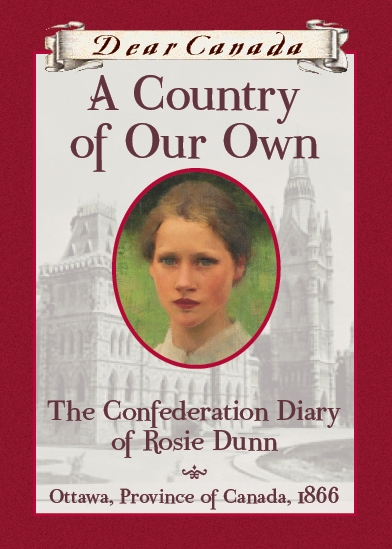 The author copies of my new book arrived today, and it’s just as exciting for book #25 as it was for the very first one.

It’s been a long, difficult, fascinating two years. I lost count of how many rewrites I did with my fantastic editor, Sandra Bogart Johnson and, as is customary for all the Dear Canada books published by Scholastic Canada, I spent many hours making certain that my facts were accurate and correcting the ones that weren’t quite. These Dear Canada books are fact-checked by the fabulous and fastidious Barbara Hehner, and Dr. Ross Fair of Ryerson University was the expert on Confederation who went over this manuscript meticulously. To say that I learned a lot during the process is putting it very mildly.

Most of all, though, I loved getting to know Rosie Dunn and seeing early, raw, muddy, smelly Ottawa through her eyes during the period of Confederation. It was a tumultuous time for a young girl.

And here I am with my author copies in July 2013–one hundred and forty-six years later.

Rosie Dunn is devastated when she learns she has to leave her home in Québec City and go to Ottawa as a maidservant to the Bradley family. All she knows about Ottawa is that it is a smelly, barely civilized sawmill town in the middle of nowhere, where pigs and cows roam the muddy streets freely. But Queen Victoria has declared it to be the capital of the Province of Canada and Canadian Civil Servants, led by Premier John A. Macdonald, are to move there and start planning for the controversial confederation of the British colonies into a country of their own. Her welcome by a cheeky Irish boy named Briney doesn’t help. Especially when he points out that his Mam has a cow named Rosie.

5 Responses to My Confederation Book is Out!